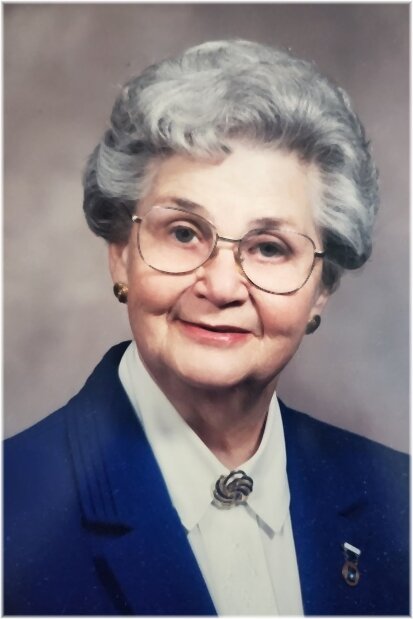 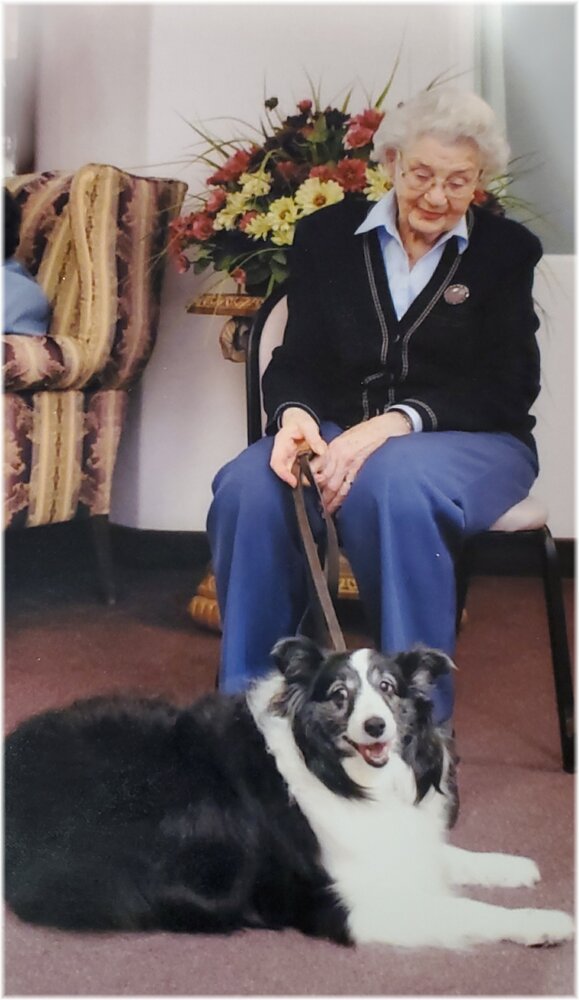 A local SPCA, The Chalmers Foundation, The Passamaquoddy Lodge Foundation, or a charity of the donor’s choice.

In celebration of a life well lived, the family of Lesslie Jean Noble wish to inform those who knew her that she passed away on January 18, 2023 at Passamaquoddy Lodge Nursing Home in St. Andrews at the age of 100. She is survived by her children Bruce (Marilyn) Noble of Fredericton - Brenda Noble of Saint John - Sheryl Noble of St Stephen, and her beloved grandsons Edward Noble (Peggy Cooke) and Robert Noble, both of Toronto.

Lesslie was born in Montreal on August 26, 1922 to Samuel and Olga (known as Susie) Nixon. She was predeceased by all her siblings, Eileen (Patrick) Devaux, Ross (Clem) Nixon, Jim (Joan) Nixon all of Ontario, and John Nixon of New Jersey. She grew up in Montreal and Toronto.

Lesslie moved to New Brunswick when she married George Noble in 1948. They met in 1943 at a dance held for service members posted in Montreal during the war. She told her family: "I don't know his name, but I just met the man I'm going to marry." They were devoted to each other for nearly 69 years, until George passed away in 2017. She trained as a secretary, which came in handy while she supported George through university (for some time as secretary to Maggie Jean Chestnut), and she later typed all of her children’s post-secondary essays and managed the law office of Noble & Noble.

Lesslie was the best mother imaginable, and the Cadillac of grandmothers, leading by example through her community involvement. She willingly offered her time, a helping hand and a friendly face to all. Some of her favourite causes included volunteering weekly at the Hospital Shop for 42 years, serving as a member of the Dr. Everett Chalmers Hospital Board, a UCW life membership at St Paul’s United Church, and acting as a Brownie and Guide leader. She was a member of various clubs, including a bridge club which lasted for 52 years, in which Lesslie and three others participated throughout. She was an avid gardener and could practically knit or play cards while nodding off to sleep.

Lesslie loved to cook and to entertain; everything from family dinners to an annual Christmas Eve open-house and impromptu neighbourhood gatherings in her well-tended garden or by the pool. She had a remarkable gift for making people feel welcome however they encountered her. That welcome extended to every creature in the neighbourhood, be they two-legged or four.

The family would like to thank the staff at Passamaquoddy Lodge for the kind and caring attention they provided to her during her residence there over the last six years.

A reception will be held on Thursday, January 26, for any who wish to attend, between 11 am and 1 pm at McAdam’s Funeral Home, 160 York St, Fredericton.

In lieu of flowers, donations may be made to a local SPCA, The Chalmers Foundation, The Passamaquoddy Lodge Foundation, or a charity of the donor’s choice.

Share Your Memory of
Lesslie
Upload Your Memory View All Memories
Be the first to upload a memory!
Share A Memory