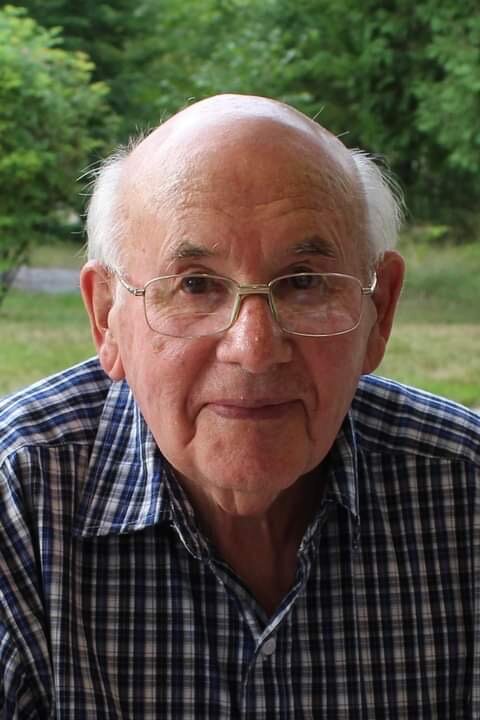 The family of Archibald (Archie) Donald Cameron sadly announce his death at York Care Centre, Fredericton, NB, on January 22, 2023. He was born on July 2, 1928 in Aspy Bay, NS, to the late Catherine (Cameron) and Donald Cameron. He was the last of their large family to survive. He was also predeceased by his first wife, Margaret (Francis) Cameron, of Westmount, NS.

Left to deeply mourn are his wife, Janet (Hornibrook) MacLeod; his stepdaughters, Helen (MacLeod) (Tom Richard) Dow, and Heather (Stephen MacDougall) MacLeod, their extended families, many nieces and nephews, and a host of dear friends and neighbours.

His career began as an electrical apprentice with Canadian Comstock Company and with National Gypsum. He worked for a time as a civilian employee with the United States Air Force, fulfilling the duties of an electrical foreman on the Distant Early Warning Line in the NWT. He then worked in the electrical trade in Ottawa and Halifax before entering the elevator industry, employed by the Turnbull Elevator Company (Dover). In 1965 he relocated to NB, working as an elevator inspector with the NB Government. He retired in 1993 as the Chief Elevator Inspector.

He was taught by his parents, at an early age, that helping your neighbour was a way of life and he never forgot that lesson. He lived his life in service to others. Archie’s quick wit and infectious humour endeared him to all who knew him. He just loved people and instantly formed bonds that lasted a lifetime. He enjoyed hockey but curling became his favorite sport. He was named an honourary member of the Capital Winter Club in recognition of his extraordinary volunteer service. For 50 years he was a member of the United Commercial Travelers.

The family is grateful for the loving care of special caregivers of all types on Tower 3 of the York Care Centre where Archie lived for the last 2 years.

At Archie’s request there will be no visitation or reception. A Funeral Mass will be held at Holy Family Catholic Church, Hanwell Road in Fredericton on Thursday, January 26 at 1PM with Father Bill Brennan officiating. In light of the fact that several family members are at increased risk from respiratory illnesses, the family asks that masks be worn. The Funeral Mass will be recorded, and a link will be placed on this obituary later Thursday.

Donations in Archie’s memory to the York Care Foundation, or a favorite charity, would be appreciated.

Share Your Memory of
Archibald
Upload Your Memory View All Memories
Be the first to upload a memory!
Share A Memory